When snow is on the ground, the bear is in hibernation. Bears retreat into their winter dens between September and March and wake up again in March–May. In the summer the males move around a lot more than most people think. They may travel several hundred kilometres in a short period of time. Female bears and their cubs live in a certain territory that may only span a few square kilometres.

The bear is agile and strong

The bear uses its forelegs very effectively for both hunting and locomotion. It is a very agile and strong animal, and a proficient swimmer and climber to boot. Bears are usually on the move at night or at dusk.

The bear will try to avoid humans as best it can. Humans hardly ever see the bear in the wild, even if they happen upon the same berry picking heath with one: the bear will nearly always retreat immediately when it detects the presence of humans. Keen senses, the ability to move silently and hide and a long hibernation period keep the bear away from human eyes.

The bear has no natural predators. Its lifespan in the wild is often under 20 years.

Bears usually reach sexual maturity between the ages of 3 and 5. A female bear gives birth to one to four cubs every 2 to 4 years. Male and female bears live in their own territories and do not really come into contact with each other outside of the mating season. The mating season begins in May and lasts until July and during this time the males may have fierce battles over the same female. 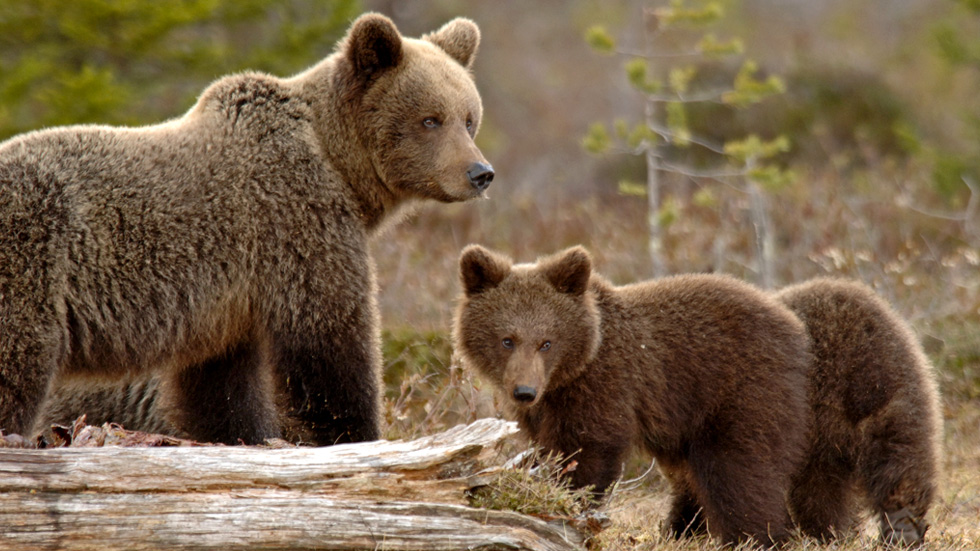 The bear has delayed implantation, which means that even though the bear mates in June–July, the fertilised egg will only attach to the uterus in late autumn and the bear foetus will begin to develop. The bear's gestation period is 194–278 days.

The cubs are born into the winter den in January–February. There are usually one or two cubs, sometimes three, but litters with four cubs are also not unheard of. A bear cub feeds on its mother's fatty milk during the first few months of its life. The cubs will usually follow their mother until the May–June of the following year, but in some cases a mother bear might be accompanied by cubs from two separate litters.

The bear doesn't always build an actual winter den but it might simply lie down under a thick spruce tree. When it does dig a den, it will usually be inside an anthill, at the base of a spruce tree or under a bank some kind. Some bears hibernate in rock crevices or dig their dens under large boulders.

The bear puts on mass in the autumn

Because the bear will not eat or drink during its hibernation, it spends the autumn storing fat in its body to carry it through the winter. In late autumn the bear focuses on food that is high in carbohydrates such as berries. The bear's appetite is tremendously increased but a short while before hibernation it will stop eating and empty its bowels completely of food mass. Fat contains a lot of energy but it also serves as a type of water reserve. As the fat burns in the bear's cells, over a gram of water is produced for each gram of burned fat. The bear spends its hibernation in a winter den that can be something as modest as a hole dug into the side of an anthill.

The bear is a master of controlling its vital functions

As the bear hibernates its body temperature may drop to around 33 degrees Celsius, which is a relatively small drop when compared to other hibernating animals that may see their body temperatures drop to near zero. Researchers have observed that the body temperature of a pregnant female bear stays at around 37 even during hibernation up until the birth that takes place in the heart of winter. The female only goes into power-saving mode once the cubs have been born. A bear's regular heart rate is around 40 beats per minute, but in hibernation this drops to as low as 10 beats per minute. The fat storage of a well-prepared bear may last for up to six months, but of course the bear will lose dozens of kilograms of fat during that time. A nursing mother bear must also give away proteins in the form of milk.

Studies have shown that bears also lose some of the proteins in their muscles and connective tissue during hibernation. This process creates toxic urea, but this substance doesn't accumulate in the bear's body as its circulation system will recycle the urea into the bear's bowels where microbes turn it into amino acids, the building blocks of new proteins. It is not known where the microbes living in the empty bowels find the energy for this synthesis. This recycling allows the bear to retain its muscle mass and strength during the long hibernation period.

The bear's bones are also safe from becoming more brittle during hibernation. Why this is the case is not completely understood, but the matter is very interesting as the bear's ability to maintain its bones might also benefit research into human osteoporosis. Blood analyses have demonstrated that the connective tissue inside a hibernating bear's body breaks down and renews itself at a balanced rate. The mineral part of the bone also sees very little decay. The slight loss of body and bone mass isn't a concern for the hibernating bear as it will have also lost weight when it wakes up in the spring, which makes moving around a lot easier.

The bear is omnivorous. Its diet consists of berries, grain, fish, insects, birds and mammals. The bear will hunt deer and moose and also feed on carcasses. However, a majority of the bear's diet, around 70%, consists of something other than meat.