Ecological factors and sustainability must be taken into account when developing wildlife tourism. A high-quality, sustainable wildlife tourism product is professional, safe and created in a way that respects the well-being of the local and regional nature and the target species. The wildlife tourism providers are in a key position here as they sell these services to tourists. 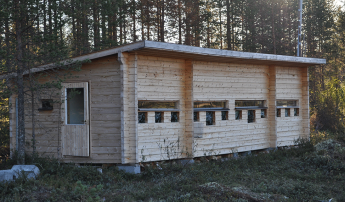 Tourism providers in the Kainuu, North Karelia and Koillismaa regions offer tourists the opportunity to see and photo large carnivores up close from cabins built near feeding spots. This opportunity often comes with a full service package that includes a professional guide, transportation, meals, lodging and insurance policies in addition to the night spent at the observation cabin.

Bears are the most common large carnivores seen at these cabins, but wolves and wolverines are also occasional visitors. Spotting a golden eagle, sea eagle or a black kite (Milvus migrans) from the observation cabin is also an exhilarating experience. Lynxes are not seen at these feeding spots as they are not carrion feeders.

Following in the paw prints of large carnivores

For many people, seeing the tracks of a large carnivore is a valuable experience in itself. It is also a great opportunity to improve one's zoological knowledge. Trips where a professional guide takes tourist groups to see animal tracks in the wilds are available in many countries. In Finland there have been events where people ski along wolf tracks, for example. Wolf howling trips take tourists to the woods to howl like a wolf as the daylight wanes. Hearing the wolf's reply in the dusky forest can be a once-in-a-lifetime experience. 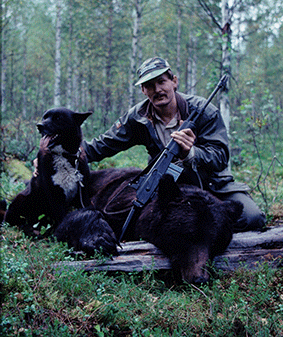 Hunting forms a significant part of wildlife tourism in Finland. During the bear hunting season (20 August – 31 October) the backwoods of Kainuu attract up to hundreds of bear hunters. Kainuu is chosen as the target region because the majority of exceptional bear hunting permits granted for the purposes of population management are issued there. The lynx can be hunted throughout the country, so it does not affect hunting tourism as much as the bear.

The bear also features prominently in other nature centres maintained by Metsähallitus in different parts of Finland. The Finnish Museum of Natural History in Helsinki, the Hunting Museum in Riihimäki and many other museums across the land also include large predators in their exhibits.

Large carnivore tourism across the globe

Wildlife tourism is a growing segment of nature-based tourism all over the world and it brings benefits to both local economies and nature conservation efforts. Big and impressive species, such as mountain gorillas, tigers, rhinos, elephants, bears and wolves are the key attractions in wildlife tourism. People are ready to travel vast distances and pay handsome fees to see wild animals in their natural habitats.

The founding of the Bwindi national park in south-western Uganda in the early 90s is one example of how an entire rain forest could be preserved with the help of just one charismatic species. Today the national park is maintained with funds generated by gorilla tourism. Tourism has also changed the way the locals view the mountain gorilla: the species was once considered a pest animal, but now it has become a source of income.

In North America, the Isle Royale National Park in the state of Michigan is especially known for its wolf and moose populations. The park's research station receives thousands of visitors each year. It is also estimated that wolf transplantations at the Yellowstone National Park have significantly increased the number of visitors to the park. Even though the probability of actually seeing a wolf is quite low, most visitors are hooked by the mere fact that the wolves are there. In Alaska, a growing number of tourists want to participate in guided trips where they can hear wolves howling. In all these locations, wolf-based tourism has brought in additional income, employed locals and supported nature conservation efforts in the region.

Alaska used to be the only place on the planet where tourists were offered bear watching packages. Now Finland is one of the top destinations for bear watchers and photographers in the world. In Sweden large carnivore tourism is only just beginning to grow even though Sweden has three times as many bears as Finland. The possibilities offered by Kainuu, Koillismaa and North Karelia are widely known throughout the world. Tourists spent around 20 000 nights in observation cabins in Finland in 2013. Many renowned nature photographers from all over the world come to Finland to photograph large carnivores in our conifer forests and marshes. Finland has always been the land of saunas and lakes, but now Finland is also becoming the land of bears.

Find photographs and videos of large carnivores and there way of living in different times of year in the Gallery.