Signs of a lynx

The paw print of the lynx is round but asymmetrical. The digital pads look small and round, and sometimes they even resemble elongated fingertips. The toes are highly mobile.

Traces of an adult lynx in snow. Photo: Antti Härkälä

The lynx leaves roundish paw prints typical of felines. It has four toes, which are visible in the tracks. The digital pads of the lynx look small and round, and sometimes they even resemble elongated fingertips. The paw print of the lynx is not symmetrical in shape, as the second toe of the front paw sticks out further than the rest. When on the move, the lynx usually retracts its claws.

The outlines of a lynx paw print in the snow look slightly blurred because of the thick fur on the digital pads. This is why the print appears so large in the snow: it is 7 to 12 cm in length when measured by its outer edges. When measured by the digital pads, on the other hand, the length of a lynx paw print is 7 to 9 cm. To identify the age group of the lynx, the width of the footprint is a more reliable guideline than its length and constitutes important additional data that large carnivore contact persons save to the electronic Tassu information system when reporting their sightings.

Similarly to all cats, the lynx has highly mobile toes. If the lynx extends its toes, the paw print looks wider than usual. This is why attempts to determine the size of the lynx based on its tracks may be misleading, and it is important to pay attention to the age of the tracks as well as the surface and the way the lynx moved when drawing conclusions.

In heavy or hard-packed snow, the lynx uses its claws for extra purchase. In this case you can exceptionally see claw impressions in the paw prints, and the toes are spread out. However, the paw print will also clearly show the asymmetry of the digital pads.

While a lynx typically travels at a walking pace, it also often trots. Sometimes the tracks look like the lynx was dragging its feet as there is a line on the snow surface forwards from the footprint. When the lynx is trotting, there are two parallel lines of tracks in the snow, and the lynx places both the forepaw and the hind paw on the same spot. On a solid surface, you can clearly see the imprints of each digital pad. The length of a lynx's walking step is 80 to 110 cm, which is clearly shorter than the step of a wolf. When the lynx is trotting, the length of its step is typically 130 to 150 cm or a bit longer, depending on the size and speed of the animal.

In soft snow, the lynx places the forepaw and hind paw on the same spot and its tracks may be mistaken for those of a wolf, especially if snow has fallen on them. In this case, measuring the distance between the steps and tracking the animal for a longer time may help identify the species. In soft snow you may not always see the impressions of the digital pads, in which case you should follow the tracks until you find a clear paw print.

When on the move, the lynx travels in a straight line but not as purposefully as a wolf. Unless the lynx is moving to a new area, the tracks may sway a little from their course. A lynx rarely goes around sniffing trees and bushes; if the tracks would indicate such behaviour, they were probably left by a dog. A lynx has a large territory, and it usually keeps following the same trails. In heavy snow, a lynx often uses tracks made by hares and other animals.

Other signs of a lynx

The lynx kills its large prey, including white-tailed deer or reindeer, by biting them in the throat. The lynx does not usually maul its prey, and an animal killed by a lynx will have sharp teeth marks and coagulated blood on its throat. Lynx is primarily not a scavenger. Unless it has a litter of cubs to feed, the lynx usually only eats a portion of the large prey animal's hind section.

Like all cats, a lynx covers its urine and faeces with soil or snow. Fresh lynx faeces are black and smell unpleasant.

When killing such large prey as a white-tailed deer, the lynx suffocates it by biting it in the throat. The throat of an animal killed by a lynx remains largely intact, with coagulated blood around the needle-sharp teeth marks.

The lynx kills its large prey, such as white-tailed deer or reindeer, by biting them in the throat. The lynx does very little mauling and an animal killed by a lynx will have sharp teeth marks and coagulated blood on its throat. The lynx doesn't really feed on carcasses. When moving without cubs, the lynx will usually only eat a portion of the large prey animal's hind section. 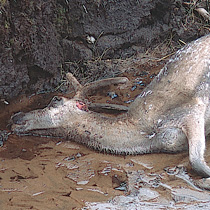 The lynx kills its large prey animals, such as reindeer, by biting them in the throat. The throat of an animal killed by a lynx remains largely intact and one can find coagulated blood around the needle sharp teeth marks.