The bear is omnivorous. Its diet consists of berries, grain, fish, insects, birds and mammals. The bear will hunt deer and moose and also feed on carcasses. However, a majority of the bear's diet, around 70%, consists of something other than meat. A bear may leave behind a broken anthill or tree stump as it looks for insects to eat and it will also check under the bark of fallen trees for larvae.

The bear is omnivorous

The bear's diet consists of berries, grain, fish, insects, birds and mammals. The bear will hunt deer and moose and also feed on carcasses. The bear is capable of killing an adult moose. The felled animal will display claw marks and strong mauling marks especially on its hind end. The bear finishes its prey by biting it in the neck or shoulders and by wringing its neck. The terrain around the kill often shows very distinct signs of the struggle. The bear will cover its prey carefully and either guard the carcass or keep returning to it frequently.

A majority of the bear's diet is something other than meat 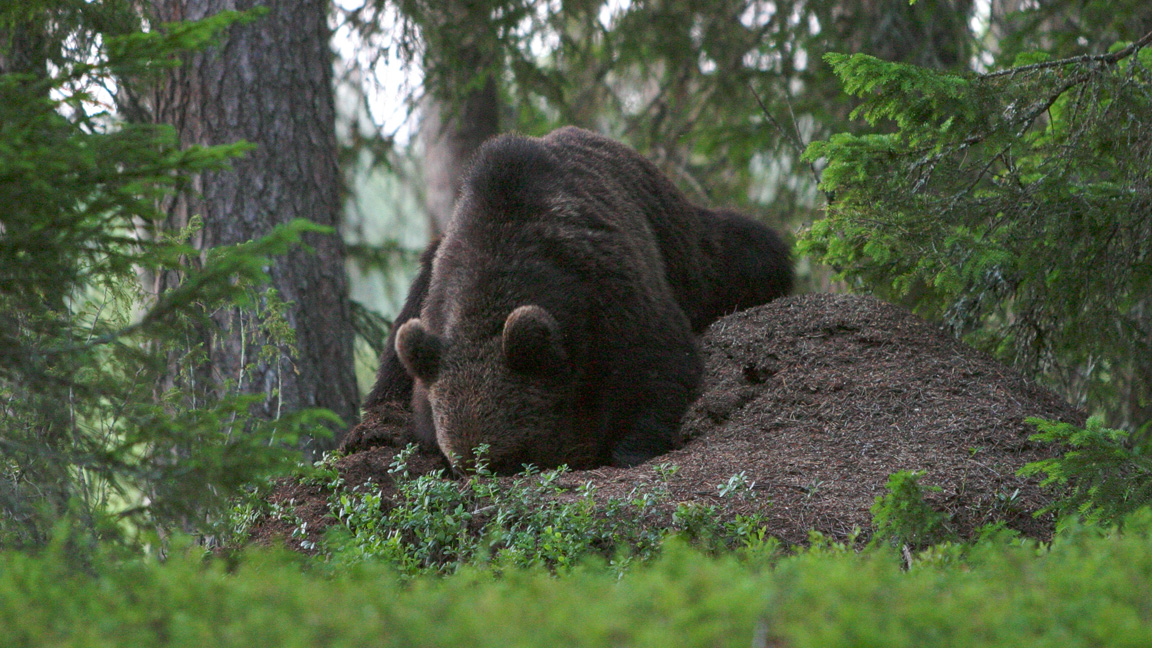 The bear might leave behind a destroyed anthill or tree stump. It will claw at an anthill and wait for the ants to rush to the scene and then eat them with its tongue. It usually takes the ants around a week to rebuild their hill after a visit from a bear. When looking for larvae under the bark of fallen trees, the bear might strip the trunks of their bark quite extensively. It is also good to remember that a broken anthill or tree stump does not always mean that there is a bear in the area.

The bear likes to look for larvae and other insects under the bark of fallen trees. When looking for larvae the bear might strip fallen trunks of their bark quite extensively.

How does the bear hunt?

The bear kills its prey by biting it in the neck or back. It can also kill the prey animal with a strike of its forepaw, which is often enough to break the animal's spine. Often the bear will also bite its prey in the snout, which leaves deep canine marks that are clearly visible. The distance between the bear's canines is between 45–65 millimetres. The bear has also been known to bite its prey in the back of the neck to kill it.

The bear begins eating its prey from the chest or hip regions. The animal's entrails are also among the first parts to be eaten. The bear has a very special way of storing the carcass. It places the carcass in an appropriate spot and buries it under several cubic metres of moss, sprigs and soil. In early spring the bear often uses snow to cover the carcass. Sometimes the bear stores its prey in running water. A large deer animal will keep a bear fed for several days and the surroundings of the carcass will then show plenty of signs of the bear, including droppings, resting spots, destroyed anthills and very typically gnawed tree branches and even entire small trees.