Signs of a bear

The bear has the largest tracks of all of Finland's native species. The paw print of a bear's hindpaw slightly resembles the footprint of a human. In the summer one can find many signs of the bear in the woods, including broken anthills and destroyed tree stumps. In the winter the only sign of its existence may be the breathing hole of its winter den.

The bear has the largest tracks of all of Finland's native species. The paw print of a bear's hindpaw slightly resembles the footprint of a human. The impression left by the bear's foot is slightly wider and more triangular than a human footprint. The bear is a plantigrade, which means the impression of its heel is most often visible in the paw print. When the bear is moving across a harder surface, the heel's impression may not be visible, which makes the bear's forepaw print short and wide. The impressions left by the bear's five toes and claws are often visible in its paw prints. 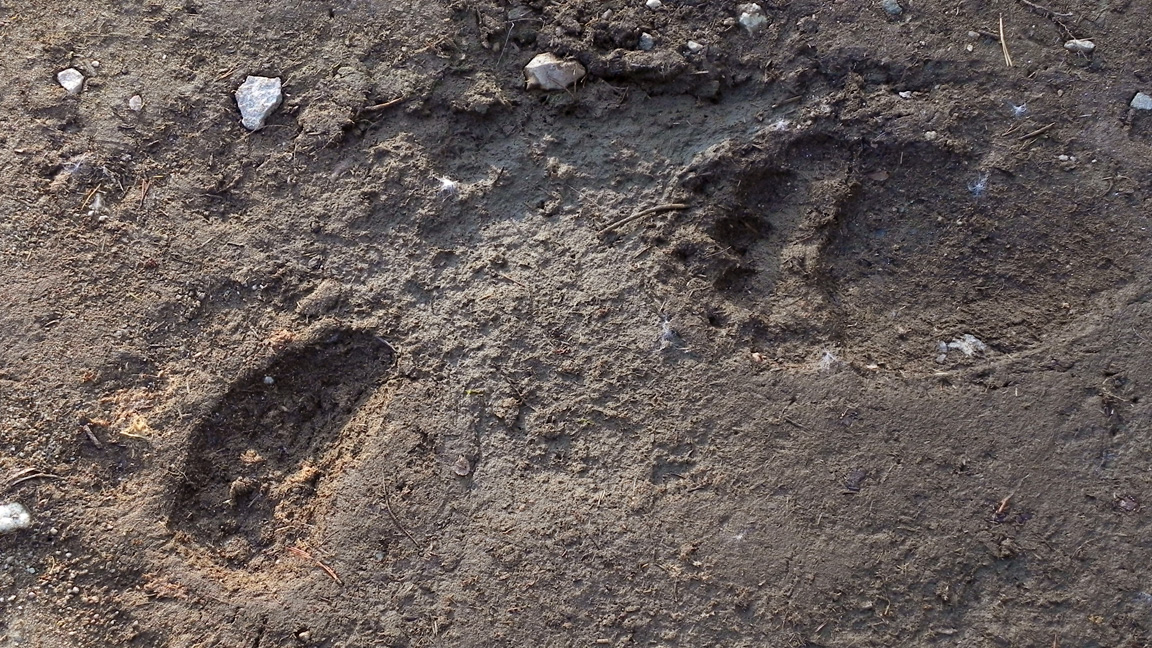 The bear usually moves by walking, i.e., it moves with at least one paw on the ground at any one time. When a bear walks, its hind leg hits the ground in front of the fore paw print, which creates tracks that resemble the footprints of a human walking without shoes. The length of a bear's walking step is 90–140 cm. The bear often places its fore legs slightly inwards and its hind legs straight forward. 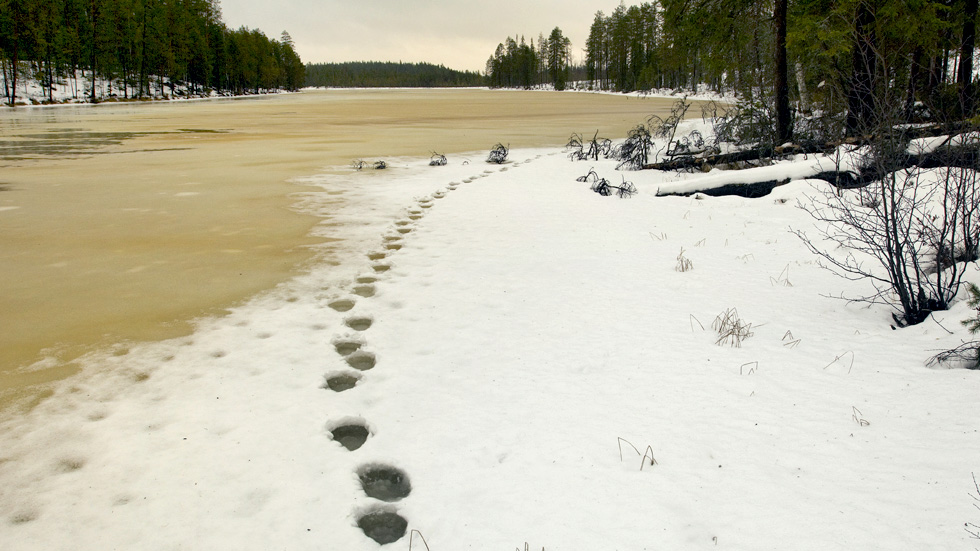 The width of a bear's step varies widely. On hard terrain the bear usually walks with narrow steps. On soft and sinking terrain (such as deep snow) the bear walks with its legs clearly spread and places its fore and hind legs in the same tracks. If the snow begins to support the bear's weight, it reverts back to its usual gait.

When chasing prey or escaping, the bear will gallop. A galloping bear will leave a typical galloping track where the other fore and hind leg hit the same spot. The bear accelerates to gallop speed by jumping, which leaves pairs of jumping tracks on the ground. The length of these jumping steps varies between 150 and 250 cm depending on the size of the bear and the type of the terrain. As a heavy animal the bear cannot keep jumping for long so it will begin to gallop as soon as possible.

Other signs of a bear

Finding bear tracks in the summer time is not easy, even if you know that a bear lives in the area. Dirt roads and ditches are good places for searching for bear tracks. The bear rarely leaves clearly visible signs on blueberry heaths or other similar places, but on occasion one may find evidence of a bear feeding on blueberry or lingonberry bushes. As an omnivorous animal the bear eats berries, vegetables and insects as well as meat. 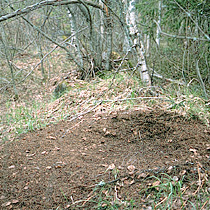 The bear might leave behind a destroyed anthill or tree stump. Other animals are also known to wreak havoc on anthills, so a destroyed anthill is not always a sign of a bear's presence. As a large and strong animal the bear usually causes more damage to the anthills it destroys than other, smaller animals.

The bear is brawny animal, so when it decides to take apart a tree stump you can often find splinters everywhere in the surrounding terrain. The stump might also exhibit powerful bite marks. 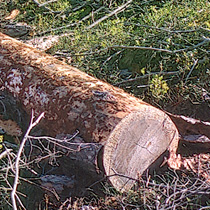 The bear likes to look for grubs and other insects under the bark of fallen trees. When looking for grubs, the bear might strip fallen trunks of their bark quite extensively. Bears also mark their territories by rubbing their scent on pine or spruce saplings. The bear is also known to leave scratch marks on pine trunks at the height of several metres. The claw marks of its forepaws are often clearly visible on tree trunks at the height of a person's head or higher. 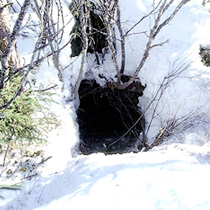 The bear's winter den is very difficult to find. Often there is only a small mound visible in the snow and sometimes there is just the breathing hole. In the picture the bear has already left its den. The bear often wakes up gradually and spends some time lying in a secondary den it has built near the actual winter den. 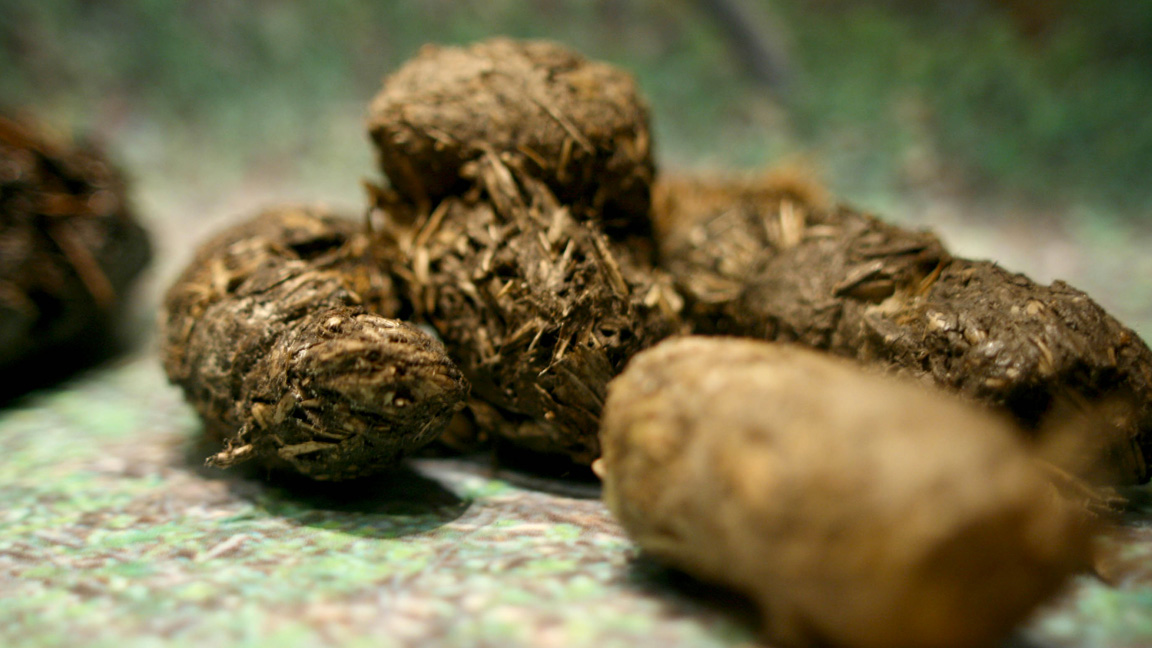 The look of a bear's droppings varies widely depending on what kind of food the animal has eaten. A pile of bear droppings is as large as that of a moose or a cow. In the autumn one can see berries and leaves in the bear's droppings. In the summer the bear eats a lot of vegetable food, which makes its droppings resemble cow or moose dung. However, a pile of bear droppings is black on the inside while a pile of moose dung is brownish or greenish throughout. If the bear has eaten only meat, the droppings are mushy and black. A bear that has fed largely on carrion produces more brownish than black droppings that have hair and bone fragments in them.

The bear kills large prey animals, such as moose, by striking them in the back, side or back of the neck with its paw. If the moose is not killed by the blows, the bear will bite it in the throat or back of the neck to kill it. The bear will usually try to eat the moose it has killed in its entirety. It will stay close to the carcass and might possibly guard it against intruders. Occasionally the bear will cover up the carcass so that ravens and other scavengers couldn't get to it. The bear might skin its prey with surprising skill. One might find the skin of the prey animal neatly rolled next to the carcass. As the bear spends time near the carcass, resting spots and piles of bear droppings are usually also found in the area. Unlike the wolf, the bear does not leave holes in the prey animal's large bones.