Signs of a wolf

The wolf leaves tracks that are typical of large canines. Telling the tracks of a wolf apart from those left by a large dog is very difficult.

The wolf leaves tracks that are typical of large canines. Telling the tracks of a wolf apart from those left by a large dog is very difficult. As is typical of canines, the print left by the wolf's forepaw (10–11 cm) is larger than that left by its hindpaw (9–10 cm). When measuring wolf tracks, the claws are not included. 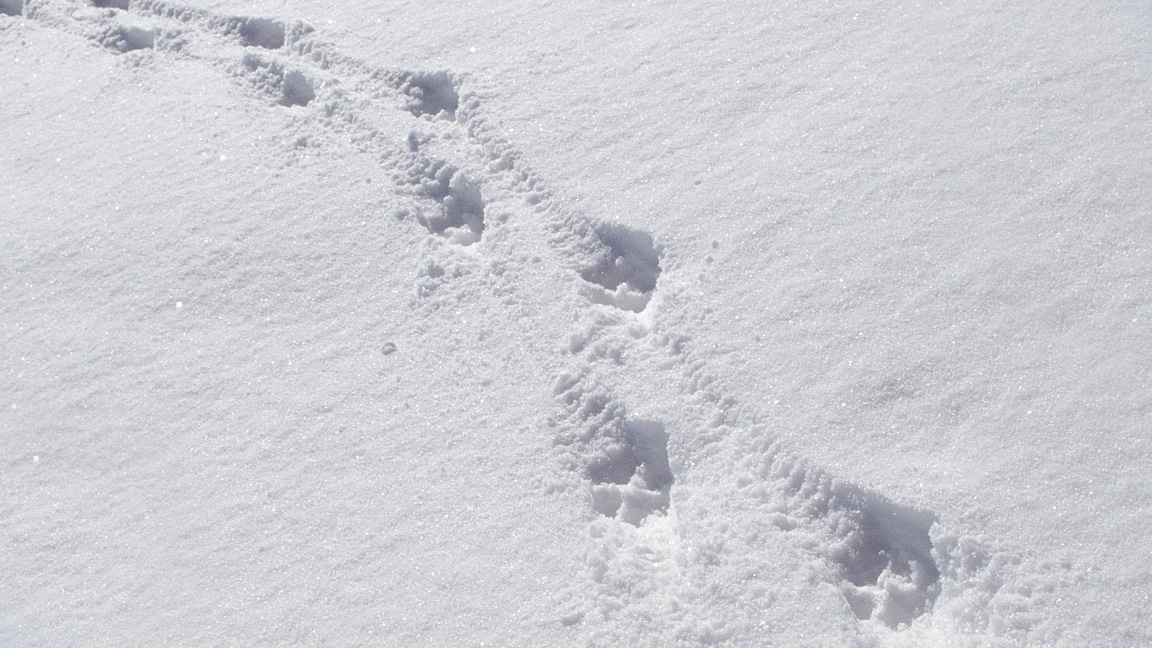 When moving across soft snow or a wet marsh the wolf will spread its toes as far apart as possible. When it does this, its tracks might get confused with those of a lynx. One might not be able to always see the impressions left by the wolf's claws on soft snow. If this is the case, attention should be paid to impressions left by the middle toes: with the wolf they will always be symmetrically in line. If fresh snow has covered the tracks, seeing the impressions becomes impossible. In these situations one should move along the track until there is a clear paw print under a tree or other such place where there hasn't been as much snow.

The wolf's preferred style of locomotion is the trot. On hard surfaces the wolf usually trots with its body slightly slanted towards the direction of movement. When the wolf moves like this, it can leave paired tracks with steps measuring up to two metres. On soft snow the steps are shorter (120–160 cm) and the wolf places the hindpaw in the same track as the forepaw. In the winter the most typical type of wolf track is a pearly line of trotting tracks. In deep and sinking snow the wolf may have to move by jumping. This is very exhausting so usually the wolf can't cross longer distances using this method. 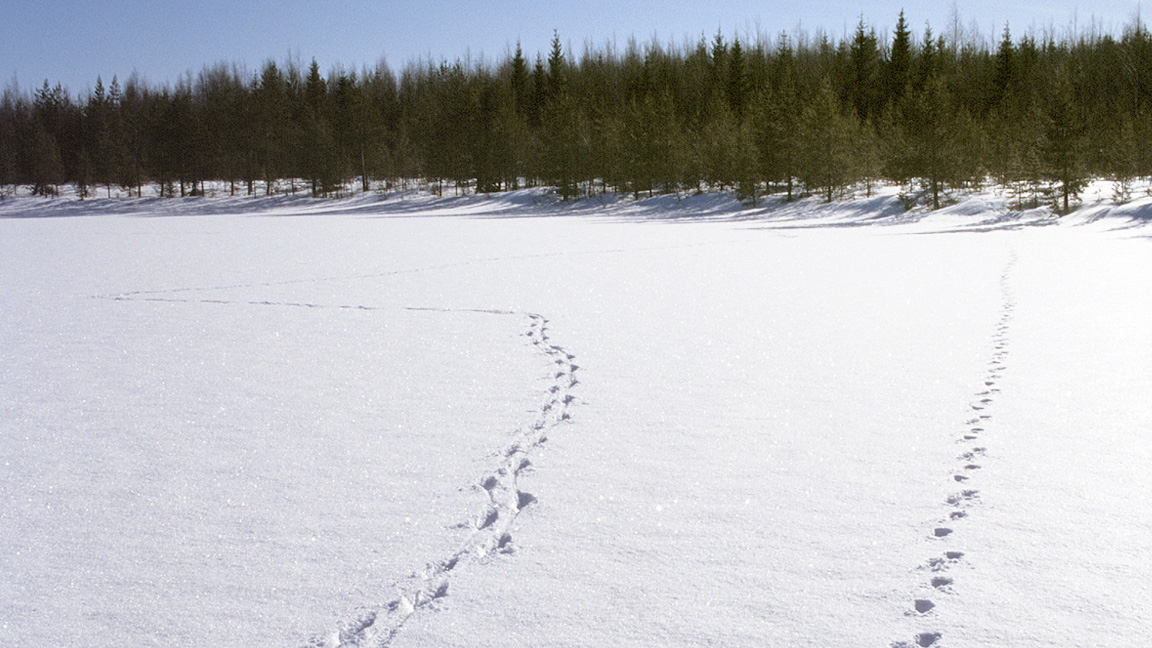 The wolf moves with purpose and determination, which means the tracks are in line with each other and the steps are narrow. The cubs are more playful in their movements and more curious in general. In late autumn as the first snows are falling, the cubs' paws have already reached their full size, which means telling them apart from the adults based on paw-size alone is no longer possible. Instead, jumping and other unruly frolicking in the snow usually give away the pups.

In soft snow the wolves in the pack share the same paths and use the same tracks. This packs the snow tighter and the holes become bigger. It is often hard to tell exactly how many wolves there are. You can only get a reliable count in places where the wolves have dispersed for some reason or by counting the impressions left by resting wolves.

Other signs of a wolf

Every now and then wolves stop for a rest both during the day and the night. When there is no snow on the ground, finding wolf resting places is nearly impossible, unless you are incredibly lucky. In the winter time the resting spots are clearly visible in the snow. Wolves rest in places that are higher than the surrounding terrain and position themselves so that they can monitor their surroundings. The resting spot doesn't have to be a sheltered location and wolves might rest their legs even in the middle of a wide clearing.

A wolf den is quite modest and you can hardly tell it apart from the surrounding terrain. In Finland wolves don't usually dig cave-like underground dens as they do in Southern Europe. Our wolf dens might be found under the roots of a fallen tree or in the bank of a forest ditch. 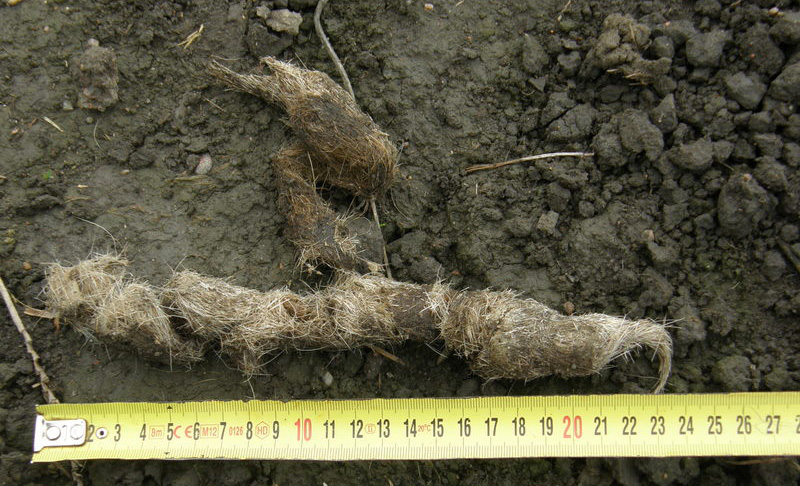 Wolf droppings are around 2.5–3 cm thick and bar-like with a strong, bad smell. They slightly resemble dog poop. Wolf droppings usually have hairs and bone fragments in them. The darker a wolf's droppings are, the more meat it has eaten. The pictured faeces contain a lot of prey animal hairs. When the droppings have this much hair and the colour is a brownish grey, there isn't much left of the prey animal anymore. 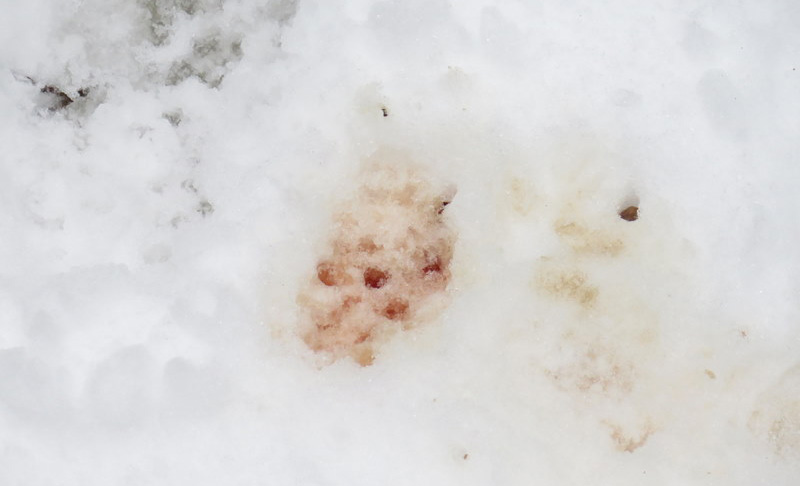 Wolves urinate like dogs: the male lifts its leg and the female doesn't. In the wolf pack the alpha couple, consisting of a male and a female, lift their legs when they pee and the rest of the pack do not. The wolf also uses urine signals to mark its territory. A wolf marking its territory lifts its leg and the chosen location is a visible one, such a rock or a tree trunk. If a wolf couple are marking their territory and there is blood in the urine, the female is coming into heat. In that case they are most probably going to have a new litter in the spring. Female wolves come into heat in February–March. 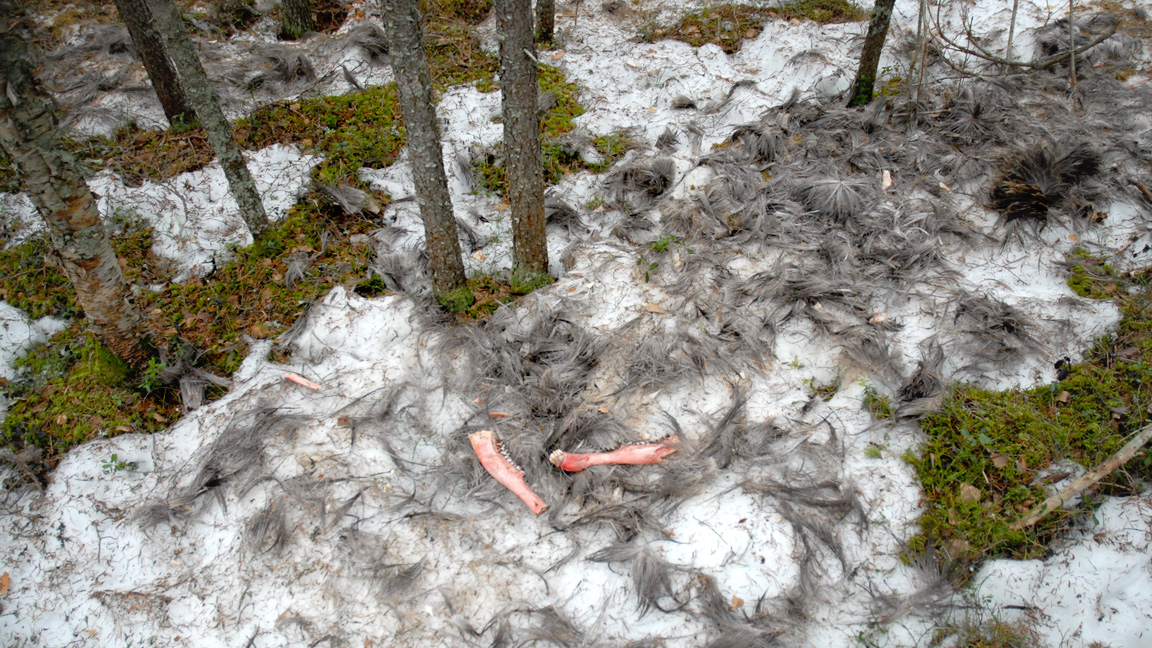 One can tell when a deer animal has been killed by a wolf when it has been powerfully bitten in the throat. When the throat is severed the warm blood will make its way through the snow and onto the ground. The wolf tears at the throat of a deer or reindeer a lot more severely than the lynx does. When attacking a moose, wolves usually also tear at its sides and hind legs. Wolves intend to eat the deer animals they kill nearly completely. They leave behind hair, bones and the animal's rumen strewn somewhere near the carcass. Wolves also carry pieces of the carcass around. Unlike the bear, wolves bite holes into the prey animal's large bones.