Signs of a wolverine

The wolverine moves in a unique manner, which leaves behind tracks that stand out because of their orientation and large size.

The wolverine moves in a unique manner, which leaves behind tracks that stand out because of their shape and large size. The wolverine moves either by jumping, which creates paired tracks, or by galloping, which leaves a slanted line where the impressions appear in threes. The wolverine's paw print features five toes, unlike lynx and wolf tracks in which only four toes can be seen. The wolverine's paw print is triangular and tapers towards the heel. The impressions left by the toes are clearly visible as they curve on the front of the paw's central pad in a sort of semi-circle.

The wolverine's foreleg is larger than its hindleg. Including the heel, the paw print of the foreleg is 12–16 cm long. The wolverine's hindleg leaves a print that is 8–10 cm long. The wolverine is a partial plantigrade, which is why the carpal pads of its forelegs leave a distinct impression in the snow if it isn't too deep and it isn't light frost snow. In these kinds of snow conditions the rear parts of the carpal pads are usually not distinctly visible and the paw print is little more than an outline of the paw.

The wolverine has large legs relative to its size and weight that allow it to move quickly and with little effort even in deep, sinking snow. You rarely see a wolverine wade in the snow as our other large carnivores are sometimes forced to do when the snow is particularly deep and soft. In these kinds of conditions the wolverine will walk, which it never really does otherwise. The wolverine's walking tracks are large and its steps are a lot shorter than those of lynxes or wolves. The wolverine will try to revert back to jumping or galloping as soon as possible.

The wolverine's preferred mode of locomotion is a calm gallop. This results in tracks where the paw prints are grouped in threes or fours. A galloping wolverine's step is between 80 and 120 cm long. In soft snow the wolverine usually moves by jumping, which is typical for animals in the weasel family. The step of a jumping wolverine's step is 60–100 cm long. The wolverine varies its movements quite a bit and it may suddenly go from galloping to jumping or the other way around, depending on the situation.

The wolverine is known to embark on long, determined treks. It is a curious animal that may change its course when it comes across an interesting land mark, such as a large boulder. Sometimes a wolverine's tracks might have a winding quality to them, sort of like those of a fox that is looking for food under bushes and trees. The wolverine is an animal that likes to stay in motion. It is a tireless wanderer that sways its way forward at its own leisurely pace.

Other signs of a wolverine

The wolverine is a skilled climber and its claws might leave marks on pine trunks. In February–March the wolverine will dig a snow cave where it will give birth to its cubs. 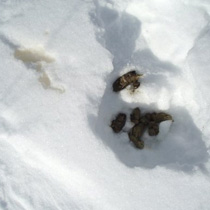 The wolverine marks its territory by biting and urinating on spruce and pine saplings. The look of wolverine droppings varies. They may be dark in colour or they may have bone fragments or hairs in them. They are usually shaped like a sausage that tapers towards the other end. Wolverine droppings are around 2.5 cm thick. 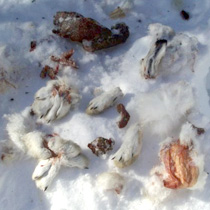 The remains of a hare killed by a wolverine. 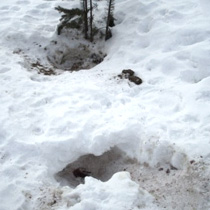 An old moose carcass hidden by a wolverine.

The wolverine is a carrion feeder. As a predator it is clumsy when compared to our other large carnivores, but in the winter it can still kill several reindeer in quick succession.

Behaviour and reproduction of the wolverine

The wolverine preys on an extremely wide selection of animals from small mammals to deer species and full-grown reindeer.