The population management plan presents both biological and societal guidelines by which the wolverine population is to be systematically managed so that it remains a vital part of Finnish nature. On the one hand, wolverine population management is bound by the general conservation goals of an extremely endangered species and the goal of achieving a favourable conservation status for the wolverine as required by international agreements and the EU Habitats Directive. On the other hand, the management activities are guided by socioeconomic desires to minimise damages caused by wolverines.

Based on their behaviour and distribution, it may be said that Finland is home to two different types of wolverine. Despite its small overall population, the wolverine is the most significant cause of damages to reindeer in Fell Lapland, where it is most numerous. But then again, the forest-dwelling wolverine living outside of the reindeer herding area has slowly grown in numbers and spread to new areas without causing any harm or disturbance to humans.

In the Forest Finland region the wolverine population is allowed to grow and spread to new habitats naturally.

Killing a large carnivore without a permit or in a manner that is otherwise against the law is usually considered an aggravated hunting offence. Occasionally illegal hunting comes out in Finland, and therefore the authorities have increased the level of control.

Sightings as the basis of population estimates

Natural Resources Institute Finland's (Luke) estimates on the numbers of animals are primarily based on sighting data collected by a volunteer organisation consisting of the contact persons of regional game management associations. Other utilised methods include on-the-ground censuses made by hunter...

Large carnivores elicit strong reactions from people. On the one hand they are feared and hated, and on the other there is a desire to protect them and they are viewed as symbols of the wilderness. In reality, most people know fairly little of our large carnivores.

EU and the conservation of large carnivores

As a member of the European Union, Finland commits to taking EU legislation into account in its decision making. The Directives of the European Community are incorporated into national legislation, which extends their reach to also cover all private operators. The status of large carnivores is regul... 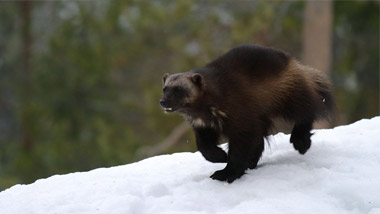 When you are travelling in nature you might be following a bear's path, quite literally. But can you tell the tracks of a wolf apart from tracks left by a dog? And do you know where you should report your large carnivore sightings?

Do you know what to do if you meet a bear in the woods?

You would really like to go berry picking or mushroom hunting in the woods, but is it safe? In general, large carnivores try to stay away from humans, but in some exceptional cases you might find yourself face to face with a bear. Here is some advice from a wildlife expert on how you should act.